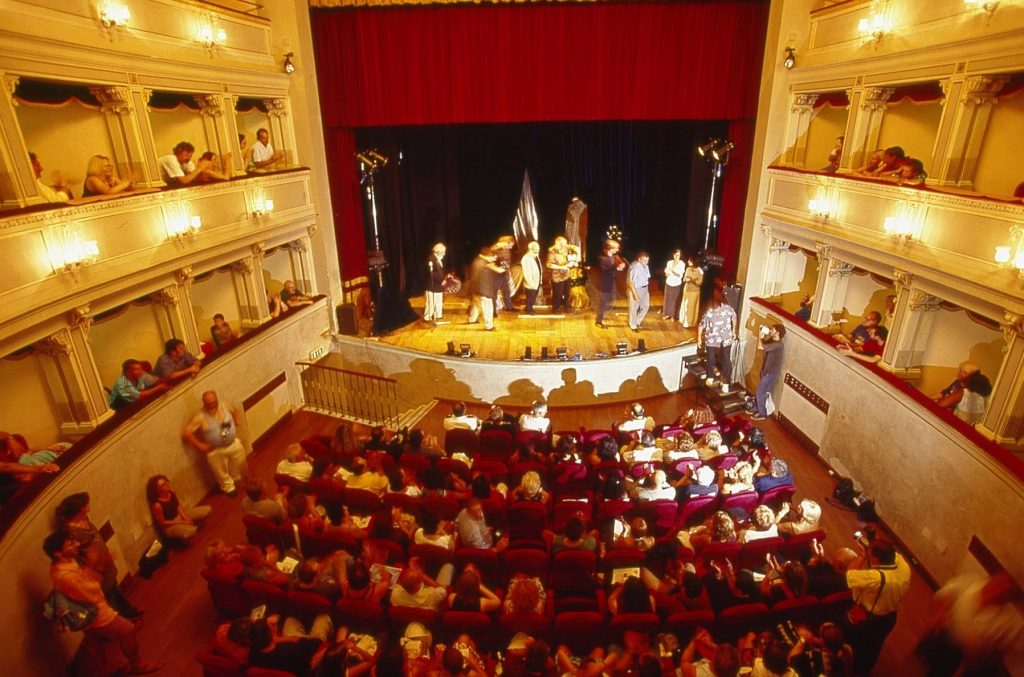 Have you ever seen the Theater of Cervia?

A remarkable historical and artistic example of minor architecture of the nineteenth century, a century of great love for opera theater.

In the history of Cervia there is talk of a theater from the early eighteenth century, it had about 200 seats and was used for theatrical performances by actors and marionettes, for concerts, academies and tombolas.

In 1858 the City Council decided to build a larger theater in the West Bulwark called “dei Carabinieri”. Works began in 1860, (the year of the expedition of Garibaldi and the Thousand) and were directed by Zanuccoli and Zacchi. Ulisse Bonelli, a sculptor, realized the architectural decorations, while the painters Giovanni Canepa and Andrea Bellini took care of the decorations. The ceiling is decorated with floral motifs, with Muses representing, according to tradition, the most beautiful women in Cervia.

The ceiling vault rests on the walls of the gallery through an elegant system of pointed arches. At the center you can admire a wooden rose window that was open and closed in ancient times to make room for a retractable chandelier. In the pictorial decoration of the vault 12 medallions representing famous people are painted, among which Garibaldi and Mazzini stand out.

A curtain of the Teatro Comunale presents a suggestive view of the city of Cervia.

The jewel of the theater is the Velario, the work of the same Canepa, the curtain of 1862 depicting Apollo’s boat that arrives at the port of Cervia accompanied by nine Muses to pay homage to the city, while on the other side the boat of the Cervesi Magistrates go meet. A burchiella is represented between the two boats, a characteristic boat used for transporting salt.

The Velario of the Theater of Cervia seems to be the only curtain in the Emilia Romagna region with a seafaring subject. Enzo Petrucci from Urbino subjected it to a delicate restoration by Enzo Petrucci of Urbino. The pictorial restoration of the damaged and missing parts concluded the operation, and on November 8th 1997 the canvas returned to the cultural heritage of the city, in its original location.

On Christmas Eve of 1862, for the inauguration, the comedy “The family of the drunk” represented by the International Drama Company was a success. The City Council approved the management of the same designer, Tommaso Stamigni from Perugia. The painter Giovanni Canepa of Lugano made the decorations, including the scenes, the scenes and the curtain.

There were represented operas, operettas, comedies, concerts and various art shows. The people of Cervia really appreciated prose and lyric poetry. Many dramatic or comic companies trod the scenes of the Comunale. Some local theater companies also had good success. It seems that Donizetti was the favorite author. To remember June 16, 1850, the last concert of the great guitarist Luigi Legnani.

The autumn 1894 season was memorable when Lucrezia Borgia, Donizetti’s Sonnambula and Rossini’s Il Barbiere di Siviglia were represented. The conductor was Maestro Carlo Gherardi, the same conductor of the band. In these cases the fun of the public was to send jokes to the extras and the choristers, almost always saline, who kept a fiasco of Sangiovese at hand to clear their throat.

Today the theater has a total of 229 seats (plus 2 for the disabled) and can also be used as a conference room. It has audio material, mixers, loudspeakers, amplifiers, microphones, wardrobes. During the year a theater season, comedy and dialect theater take place in the theater, shows are organized for children, concerts, musical events and conferences.

Information on the events page. Look for covid 19 restriction!

Visits by appointment for groups, for information and reservations::

Where is it
Via XX Settembre 125, Cervia

MUSA: the Salt Museum of Cervia